2. All About Caraway Seeds

3. Tahini in Your Kitchen

5. Another Multi-Lingual Herb and Spice Index

All About Sesame Seeds 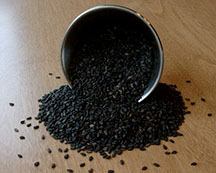 Most folks know that “Open Sesame” granted the thieves entry into the robber’s den in the world of The Arabian Nights. But how many know that the word sesame was chosen because when the seeds pop from the pod, the sound is similar to that of a lock being opened? So goes one myth surrounding this ancient tale that includes an ancient seasoning.

Used both medicinally and as a food, sesame seeds and the oil pressed from them have been documented back to 1550 B.C. The oil proved invaluable for cooking to those countries that had no olive trees, Marco Polo observed in 1298. Still today, the seeds and oil are used in large quantities all over the world. Asians consider sesame a staple food.

Approximately four billion pounds are produced each year, most of the seeds are pressed into oil. China is the largest producer but the United States is active in production as well. We grow the herb in Texas, Louisiana, California and Arizona. Planted from seed, a commercially grown plant can reach six feet in about four months. Harvesting must be handled with care since the capsule, or pod, that holds the seeds will shatter upon ripening.

Sesame seeds are available hulled or unhulled. We are probably most familiar with the milky white hulled seeds found on baked goods. Unhulled, the seeds vary in colors such as assorted shades of brown, black and even red. Black seeds are difficult to obtain but make a most attractive garnish.

To bring out their nutty flavor, toast the seeds in a small, dry skillet or for about 15 minutes in a 350 degree oven. The benne seed, as sesame is known in the South, enhances more than breads and desserts, try sprinkling the seeds over steamed vegetables or a crumb-topped casserole.

1/4 teaspoon cayenne pepper, or to taste

In the bowl of a food processor fitted with the steel blade, place sesame seeds, garlic and olive oil. Process briefly, until the garlic is chopped fine.

Place hummus in a serving dish and arrange vegetables and pita triangles around it.

Hummus will keep, covered in the refrigerator for about five days. Allow it to come to room temperature before serving.

The Mistress of Spices: A Novel

An exotic novel that's so much fun! The unpredictable, likable mistress will keep you turning pages until the end when you'll wish for more. See aPinchOf.com's review of this book.

Check out all of the other titles too in this tiny bargain-priced series of yummy and quick herbal recipes.