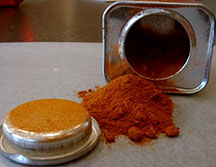 A Hungarian proverb: One man may yearn for fame, another for wealth, but everyone yearns for paprika goulash.

Long considered a bland spice and primarily used as a garnish, paprika has distinct flavor when imported from Spain or Hungary. Spanish paprika has a sweet, rich taste while the Hungarian variety provides a peppery bite. Both are more richly colored than our domestic paprika. Perhaps this is due to the fact that in Europe, most of the peppers are air dried, or cured, for up to 25 days before grinding. In the United States they are dried artificially in about 30 hours. All varieties are derived from Capsicum annum, a sweet red pepper. It is the only spice that is traded strictly as a ground product although if the peppers are canned or bottled we know them as pimento.

Paprika was introduced to the Spanish by natives of Hispaniola during Columbus’ second voyage to the New World in 1493. Hungarian scientist Dr. Szent-Gyorgyi was awarded the Nobel Prize in 1937 for isolating vitamin C in paprika. He also discovered that, pound for pound, paprika is a richer source of the vitamin than citrus.

Large quantities of paprika are used in making sausage and meat products as well as in other processed foods where a deep red color is desired. It is actually one of the three most popular seasonings. Seek out the highest quality paprika by looking for Spanish, rather than domestic, on the label of spice jars or try to find Hot Hungarian Paprika packed in tins at most supermarkets.

Bring a quart of water to a boil. Peel potatoes, if desired, and cut into 2-inch chunks. Add potatoes to boiling water and cook for 10 minutes, until softened but still firm. Drain well. Arrange in a baking dish just large enough to hold potatoes in a single layer.

Cook up some sunshine anytime of the year with a book that's as fun to read as it is to eat from. Alligator anyone?

Not a cookbook but an illustrated guide to ninety fresh and dried chile peppers from a man who knows how to use them.

Fully illustrated and categorized by flavor this is indeed a reference book for any kitchen.