2. All About Filé Powder 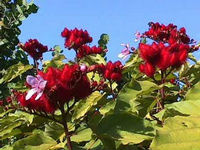 At first glance, annatto seeds resemble fishbowl gravel. The color of terra cotta and the shape of small stones, this spice looks rather inedible. Annatto seeds are often ground for cooking or processed to use as a "culinary dye."

The thin coating of the seed is removed to produce a basic pigment known as "bixin." This is what gives color to butter and cheese as well as salad dressings, fish products and confections.

Annatto is a shrub native to the Caribbean, South and Central Americas. Also referred to as the Lipstick tree, it has glossy leaves and pink starburst flowers. Seed pods are picked just as they begin to split and then dried in the sun. Peru is the largest producer while Brazil and Kenya are both known as major annatto processors.

Achiote, Spanish for annatto, is common in Caribbean and South American cooking. It has been called "poor man's saffron" for the color is similar to the more prized seasoning. The ground seeds are often found in sauces, stews and rice dishes.

The flavor is "earthy," somewhat dusky but rich. The seeds give off a lemony odor but none of that comes across in the taste. After seeping in oil to produce an unusual flavoring, the seeds might remind you a bit of popped corn kernels but would not be particularly appetizing to add to a recipe. Look for seeds to grind yourself or make the flavored oil (recipe below). Ground seeds are available, too. Use the powder for enhancing sauces, chicken dishes and Mexican recipes. Check into traditional Mexican and Caribbean cookbooks for more authentic uses for this elusive seasoning.

Annatto seeds may be somewhat hard to find. Latin markets are a good place to start along with more serious major spice dealers. As you cook with it in your own kitchen, try not to spill or spatter on your counters or clothing. The spice may stain, usually just temporarily.

Combine 1/2 cup olive oil with 2 Tablespoons annatto seeds in a small skillet. Heat over medium- high heat for 3 to 5 minutes, until the oil takes on a deep golden color. (Watch for spattering as the oil heats.) Remove from heat and allow to cool. Strain and use as desired.

Heat 1 Tablespoon of annatto oil in a heavy skillet over medium-high heat. Add 6 to 8 sliced new potatoes and sprinkle with salt and pepper to taste. Saute for about 5 minutes, reduce heat and continue cooking, stirring occasionally, until potatoes are cooked through. Season with salt and pepper again and serve. Makes 2 servings.

Rinse a 4 lb. roasting chicken and pat dry. Sprinkle the spice mixture into the breast cavity and add 2 small bay leaves. Place the bird on a rack in a roasting pan. Brush skin well with annatto oil.

Roast the chicken in a preheated 375 degree oven for 45-50 minutes or until juices run clear when pricked.

Makes about 4 servings with tasty leftovers.

Olive Oil: From Tree to Table

History, photographs and recipes; this volume has it all and it's all about the olive.

Herbal vinegars are some of the most versatile elixirs you can keep on hand or give as a gift. Here you will find inspiration, ideas and recipes for other delicious concoctions.

Cook up some sunshine anytime of the year with a book that's as fun to read as it is to eat from. Alligator anyone?